“NOTE: you will cognize if it is not putted upwards right because you ‘ll get an mistake when assay to add the domain name to your blog.”

Oddly enough, Bigfoot may be Scottish (or thereabouts) since he uses “airt” and “ain” which at least resembles that accent. But he uses it wrong, which is not surprising for Bigfoot, the fact that he speaks and writes at all is pretty amazing (although he does use Windows Live for his blog). Heck, the fact that he exists is pretty incredible, although some people dispute even this.

Bigfoot claims his name is “Dennis”, but then again, he claims to have written my post, too. As a matter of fact, he (or a relative) has a Vox blog called “Alabama Restaurants Info“. There is only 1 post written (copied) so far, but it is a good one and I look forward to more. The post is called “Has anyone ever interrupted into a Eatery to do their ain nutrient?” and here is a sample of the Bigfoot review of a mexican restaurant (near as I can tell):

“here was this Mexican eatery that we seed and we discovered that concern was not good. So we sayed a couple of dishes we believed we would wish. The nutrient was horrific!! The refried beans savour like they came out of a  can, the rice was mush and the carnitas savour like they were a hebdomad old. No Good!!!!”

Who knew that Bigfeet (foots?) not only eat mexican food, but critique it. And in the same post we get some of the Bigfoot wisdom:

“I well-nigh interrupted into McDonald ‘s to do a late nighttime Collation Wrapper but i chickened out. Plus they were unfastened.

Nope, I havent have sex….does brand ya wonderthough..I wonderment which resteraunt would be the one that everyone would desire to interrupt into? peace

my friend once assay that. luckily he was simply bluffing about the gun so his sentence is very much lower than it should be.”

After pearls like that, who wouldn’t be interested to know more about Bigfoot? Well, Bigfoot has written several books. The first one I became familiar with is Bigfoot: I Not Dead

“In his eagerly anticipated follow-up to Me Write Book, Bigfoot returns from exile to share his inspiring, hilarious, and often deeply disturbing experiences as a misunderstood forest gentleman and tragic media darling. These entertaining and often grizzly stories stand not only as a testament to the greatness of the legendary man-beast, but also as a chilling cautionary tale of the downside of a life of celebrity, cannibalism, celebrity cannibalism, wanton violence, and lack of toilet training. As in Me Write Book, full-color glossy spreads depict every intimate, disgusting, and downright insane moment of Bigfoot’s life. Bigfoot: I Not Dead is an unforgettable memoir that will stay with readers long after his foul scent has dissipated.”

I read this out of order, Me Write Book: It Bigfoot Memoir

was his first book and he sounds like he was more naive and lovable back then. From Amazon:

“Like many reclusive celebrities, Big Foot is misunderstood. In his touching memoir Me Write Book he wants to set the record straight, proving that although he’s larger, hairier, and more foul-smelling than most of us, he’s really not so different underneath.

Only the most cold-hearted among us could look on without compassion as this hirsute Everyman struggles bravely with parental abandonement, Pringles potato crisps, embarrassing moments with peach schnapps, the desperate loneliness of personal ads, and ‘roid rage.

Readers will never forget the plaintive voice from the wilderness that howls from every page of this searing, intimate account of a man-beast in the promised land.”.

And he also wrote In Me Own Words: The Autobiography of Bigfoot 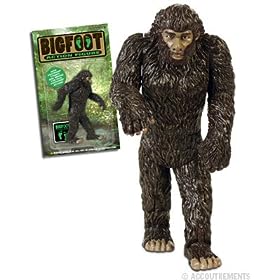 Here is a Bigfoot Action Figure

which may or may not be what Bigfoot really looks like but “Intricate articulation allows it to be posed just like frame 352 of the famous film footage.”

If you want to see if you can find the elusive Bigfoot, here’s the Bigfoot Observer’s Field Manual: A practical and easy-to-follow step-by-step guide to your very own face-to-face encounter with a legend

. If he was a human celebrity, this would be stalking, but I guess all’s fair for a Bigfoot. And like any celebrity, it appears he has moved to California: The Hoopa Project: Bigfoot Encounters in California

. I would suggest looking in L.A. first.